The following review was originally posted on a blog called File Thirteen, back in 2001. We linked to it in 2005 when we organised our first Australian tour of Line Describing a Cone. The File Thirteen blog doesn’t seem to be online any more – the review is on the Internet Archive, but we’ll re-post it here for an extra backup, and because we think it’s a nice piece of writing.

END_OF_DOCUMENT_TOKEN_TO_BE_REPLACED

The following info is copied across from Canyon Cinema’s website:

Line describing a cone is what I term a solid light film. It is dealing with the projected light-beam itself, rather than treating the light-beam as a mere carrier of coded information, which is decoded when it strikes a flat surface (the screen).

The film exists only in the present: the moment of projection. It refers to nothing beyond this real time.

The form of attention required on the part of the viewer is unprecedented. No longer is one viewing position as good as any other. For this film every viewing position presents a different aspect. The viewer therefore has a participatory role in apprehending the event: he or she can – indeed needs to move around, relative to the emerging light-form.

“… Anthony McCall’s LINE DESCRIBING A CONE [is] a film which demanded to be looked at, not on the screen, but in the space of the auditorium. What was at issue was the establishment of a cone of light between the projector and the screen, out of what was initially one pencil-like beam of light. I consider it the most brilliant case of an observation on the essentially sculptural quality of every cinematic situation.” – P. Adams Sitney, Artforum

SPECIFICATIONS FOR THE PROJECTION OF “LINE DESCRIBING A CONE” TO AN AUDIENCE
Please note: there is, obviously, especially for one-time showings, a certain necessary improvisatory spirit. So these specifications should be taken as guidelines rather than imperatives. However, I can say that the most successful showings that I have witnessed have been reasonably close to these recommended conditions.
-Anthony McCall

Performance Matters is a new journal published by the Simon Fraser University (Canada). The journal is especially interested in:

work that focuses on the materiality and the consequentiality of performance: the objects that comprise it, the labour that goes into it, the physical sites that give shape to it, as well as the effects it has — what, in short, performance does, and why that is meaningful.

Teaching and Learning Cinema has contributed an article to the first edition of the journal which is themed “Archiving Performance”, and edited by Peter Dickinson.

Our contribution is entitled “Reaching Through to the Object: Reenacting Malcolm Le Grice’s Horror Film 1“. The article begins like this:

In July 2014 Teaching and Learning Cinema, an Australian artist group coordinated by Louise Curham and Lucas Ihlein, presented a reenactment of Malcolm Le Grice’s Horror Film 1 (1971) at Canberra Contemporary Art Space. A key work of Expanded Cinema, Horror Film 1 involves a live performer playing with shadows, interacting with the overlapping beams of three 16mm film projectors. Our reenactment was the first time in the work’s 40 year lifespan that it had been performed by anyone other than Le Grice himself. In this paper we offer some reflections on the process of making our reenactment, which we regard as ontologically double: simultaneously “the original object” and an entirely new entity. We discuss our methodology of tending the archive–an activist strategy for operating at the borders of archival and artistic practice. And we suggest that reenactment, as a creative practice, can be a way of “reaching through to the object” which sheds new light on the artwork and its cultural-technological context.

You can read the whole article online at Performance Matters Journal.

[Anthony McCall’s “Line Describing a Cone”, presented by Teaching and Learning Cinema in Kandos in April 2015, as part of CEMENTA festival. Photo by Alex Wisser]

Louise Curham and I first “met” Anthony McCall’s Line Describing a Cone in 2005, when we took it on an Australian tour to Kellerberrin, Perth, Melbourne, Sydney and Brisbane.

For me, that tour was characterised by great anxiety and great joy:

…anxiety sparked by a technical mishap at our first scheduled screening in Kellerberrin (a tiny town 3 hours drive from Perth) which left us with a blown bulb, a derelict cinema full of artificial haze, and an assembled group of quizzical sheep-n-wheat farmers who I’d cajoled into coming along to see this amazing piece of 1970s avant-garde cinema;

…and joy arising from every subsequent presentation of Line Describing a Cone, which never failed to delight those in attendance.

Ten years later, we’re in the process of presenting our second “tour” of the Cone. We brought the 16mm print out from LUX in London to show at the CEMENTA festival in Kandos (about 4 hours inland from Sydney). Perhaps this was to some extent an effort to exorcise the demons of that failed Kellerberrin screening. Both Kandos and Kellerberrin are small towns a long way from any sort of projector spare parts; both places are unfamiliar with the experience of expanded cinema.
END_OF_DOCUMENT_TOKEN_TO_BE_REPLACED

OK – this blog entry is dedicated to exploring the fleshy world of Malcolm Le Grice’s Horror Film 1. If we are to plunge further into the project of re-enacting this work (and it seems that we are!) then we need to have a think about some corporeal issues.
END_OF_DOCUMENT_TOKEN_TO_BE_REPLACED

By 450pm today we had a rough sketch of the work running in the space. We relied heavily on the audio recordings of our conversations with Malcolm last year for this (audio file 2). Still lots to do – key is finding zoom lenses for the projectors. We also hope to try a lapel mic for the breath track.

Numerous small hurdles encountered on the way today – not least battery terminal issues on the 1985 Toyota Corolla and of course friends help us out – Danny (Wild) and Jess loaned us not just a projector but also a car.

Achievements: 3 x 16mm projectors running in roughly the correct alignment with breath track on mono speaker. This allowed us to both pace through the c. 30 metres from wall to projectors in the main gallery at CCAS. 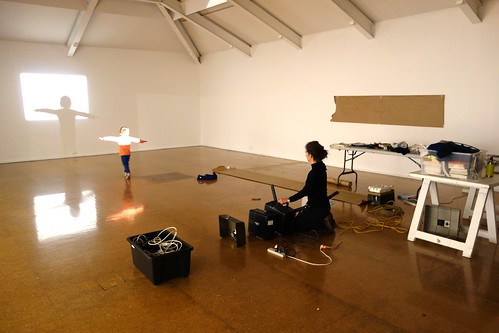 Between 23-28 June, the Teaching and Learning Cinema (Louise Curham and Lucas Ihlein) is in residence at Canberra Contemporary Artspace.

We’re continuing on with the research we began last year in the UK, towards a re-enactment of Malcolm Le Grice’s Horror Film 1 (1971).

We’re not sure how far along we’ll get this week, but on Saturday June 28, at 3pm, we’ll be presenting a work-in-progress showing of this piece.

There’ll be cups of tea, and discussion about re-enactment of performance and expanded cinema, and the particular projects we’ve done in this area.

It’s free and all are welcome. The gallery is nicely heated, thank goodness.

Here’s the event on Facebook, in case you lean that way.

‘Photochemical Games’ is a film screening of works by Australian film artists at Belconnen Arts Centre on Saturday 5 October, 6-730pm.

Film is dead! This pronouncement rears its head so frequently that for those who still like making images from chemicals reacting to light, it’s nothing to be alarmed by. Like the claims about one of its analogue cousins, the book, film looks set to continue to occupy a dusty but cosy corner, celebrated and loved by its acolytes. END_OF_DOCUMENT_TOKEN_TO_BE_REPLACED